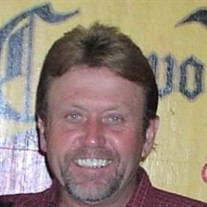 James Grady Hopkins of Louisville Kentucky, to Denver Colorado passed away on October 20th, 2021 at the age of 66 after losing his battle to lung cancer. A loving husband, father, and grandfather. James was born April 4th, 1955 to his parents Grady Crockett Hopkins and Vivian Roseanna Wine, in Kentucky. James work history consisted of serving in the US Merchant Marines before settling into Colorado, and continuing on in many jobs as a heavy equipment operator overseeing many heavy duty construction projects all over Colorado and adjoining states. He was highly skilled at running any piece of equipment that was presented to him. He helped to build the infamous Denver International Airport, and was the hardest working man we’ve ever known. James was the kind of man who lit up every room he entered, and touched every heart he met. He was known for making everyone laugh with silly jokes, and being so kind as to even give you the shirt off his own back. He had passions for old school american cars, old time rock and roll music, science of the universe, and mathematics. James was a genuinely kind, giving person with a heart of gold and often expressed his gratitude through good deeds. He loved all of the children of his blended family very much. He was a wonderful husband, dad, and grandfather who cared about love, kindness and making special memories to last a lifetime. He is preceded in death by his parents Grady and Vivian, his sister Vivian (Dinga) Hopkins, his sons Nathan and Michael. He is survived by his 3 daughters Jaime McClintock (Chris), Jade Perlman (Rob), and Alea Contreras( Luis) his step children Joshua (Nickole), Aaron and Nikki his beloved wife of 24 years Valerie Gallegos-Gunning. He also leaves behind his sisters Phyllis, Lula, Sandy and Norma. His blended family also produced 9 grandchildren that he doted, cherished and loved very much, telling each grandchild (in private of course) “you are the boss, you are number one.” We will miss this very special, beautiful man…. He did not wish to have a traditional funeral or burial, instead he opted to be cremated and his ashes spread at a very special spot in New Mexico. It is Santuario de Chimayo, a place where he found peace and comfort. Rest in peace Jimbo.

James Grady Hopkins of Louisville Kentucky, to Denver Colorado passed away on October 20th, 2021 at the age of 66 after losing his battle to lung cancer. A loving husband, father, and grandfather. James was born April 4th, 1955 to his parents... View Obituary & Service Information

The family of James Grady Hopkins created this Life Tributes page to make it easy to share your memories.

Send flowers to the Hopkins family.