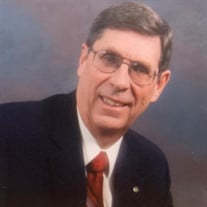 Dennis Ray Ivie, age 73, returned to his Heavenly Father on Monday, February 7, 2022 surrounded by his wife and all their children while receiving medical care in Denver, Colorado. Dennis was born on August 16, 1948, to Harry and Alma Ivie in Farmington, New Mexico, joining his two brothers, Ron and Michael, and sister Kay. From the time he was just a little boy, Dennis was known for that big, sometimes mischievous smile. He could turn a stranger into a friend in the blink of an eye with that smile, and consequently could go anywhere in the world and manage to run into an old friend. Traveling with him was always an adventure, wondering who would turn up at an airport, in New York City, or at the Kennedy Space Center. Dennis married Melody Dean for time and all eternity on December 30, 1969, in the Salt Lake City Utah Temple, and, in subsequent years, welcomed eight children. Their joy has multiplied exponentially as sons and daughters in law, grandchildren, and now great-grandchildren have joined their family—48 and counting . . . Dennis had numerous interests, resulting in many opportunities. He worked alongside his father and brother in Ivie Floor Coverings. He loved driving and selling trucks for International and PeterBilt. He worked with Ecolab in both Colorado and New Mexico. He also was privileged to start and build several of his own businesses: DR Ivie’s Remodeling, Four Corners Home Inspection (HouseMaster), and EZ Shade Steel Buildings. He also loved driving school busses for Farmington Schools, especially for activity trips. Not only did he get to be behind the wheel of a ‘big rig’, of sorts, but he also had VIP access to all the sporting events, always requesting the trips for his grandchildren’s activities. A long-time lover of Scouting, Dennis volunteered countless years to the Boy Scouts, serving in a range of capacities from Scout Master to Council member and Woodbadge trainer. He was honored with the Silver Beaver Award in 1994. Dennis was a devoted disciple of Jesus Christ. Always willing to help his brothers and sisters in the gospel, Dennis served in official and unofficial ways throughout his entire life. He served a full-time mission for The Church of Jesus Christ of Latter-day Saints as a young man to Florida, and later, with his wife, to Cape Coast, Ghana, West Africa. He led his congregation as a Bishop for five years in addition to numerous, behind-the-scenes assignments and service to individuals in both physical and spiritual ways. Dennis is preceded in death by his parents, Harry and Alma, and brothers Ronald and Michael. He is survived by his loving wife, Melody; Sister, Kay Moore (Mike); Sister-in-law Kathy Ivie; Children, Julianne Hamblin (Steven), Kristy Seeholzer (Travis), Jennifer Bell (Clint), Marilee Herman (Christapher), Eric Ivie (Aubrey), Eden Ivie, Holly Gubernath (Shawn), and Rachel Marquez (Michael); 24 adoring grandchildren, 1 great-granddaughter, and numerous nieces, nephews, cousins, and too many friends to ever count. Services will be held in Farmington, New Mexico on Saturday, February 12, 2022, at 10:00 a.m. at The Church of Jesus Christ of Latter-day Saints 400 West Apache, with a visitation Friday, February 11, 2022, 6:00-8:00 p.m. at Brewer, Lee, and Larkin.

Dennis Ray Ivie, age 73, returned to his Heavenly Father on Monday, February 7, 2022 surrounded by his wife and all their children while receiving medical care in Denver, Colorado. Dennis was born on August 16, 1948, to Harry and Alma Ivie... View Obituary & Service Information

The family of Dennis Ray Ivie created this Life Tributes page to make it easy to share your memories.

Send flowers to the Ivie family.