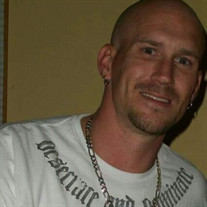 Sadly, in the early morning of Sunday August 15th, 2021, Daniel Campbell passed away suddenly at the age of 43. Daniel was born December 16th, 1977 at Fort Carson Army Base in Colorado to Daniel and Susan Campbell. He remained in Colorado for the duration of his life. Daniel is preceded in death by his mother; Susan Loann Campbell, and both of his maternal and paternal grandparents. He is survived by his daughter; Kaitlyn Campbell, grandson Damon Ezra Cantin, son Tyler Hargis, father Daniel Keith Campbell, sister Alicia Campbell, brother Bobby Campbell, as well as many cousins, aunts, uncles, and his closest friends and animals. Daniel had a strong love for life in Colorado, expressed largely through his passion for all of Colorado’s professional sports teams with an emphasis on the Denver Broncos, and football in general, as well as MMA fighting. He enjoyed using his hands, and was very good at building and fixing computers, and other electronics, also installing car stereos, and sound systems. He loved his dogs, Dazie, Maggie, and most of all his pug Petal. He was very positive, loyal, and loving to everyone he cared about. Daniel believed that everyone deserves a chance and has the ability to change for the better. He desired nothing else but for people around him to be good and happy. He often employed his unique and irreverent sense of humor to make others smile even when he felt horrible. His unconditional love will be a loss felt by everyone who has met him. Daniel would do anything for the people in his life, and sometimes even for strangers. His family and friends were everything to him. While he had never planned to be a father, he was a very proud dad, and was dreaming of the day he would be able to meet his 1-year-old grandson for the first time, a dream that unfortunately he ran out of time to fulfill. Daniel will be missed but never forgotten. Daniel's Celebration of Life will be held at Dove Valley Regional Park, appropriately, across from the Denver Broncos training camp. His family may be contacted for further details. No Farewell Author Unknown No farewell words were spoken. No Time to Say Goodbye. You were gone before we knew it. And nobody knows why. Our hearts still ache in sadness, And all our tears still flow. What it meant to lose you. No one will ever know.

Sadly, in the early morning of Sunday August 15th, 2021, Daniel Campbell passed away suddenly at the age of 43. Daniel was born December 16th, 1977 at Fort Carson Army Base in Colorado to Daniel and Susan Campbell. He remained in Colorado for... View Obituary & Service Information

The family of Daniel Jeffery LB Campbell created this Life Tributes page to make it easy to share your memories.

Send flowers to the Campbell family.