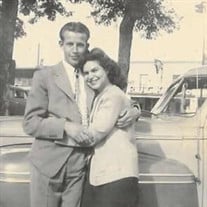 Velma "Sandy" Mae (Wetzbarger) Fritz Velma was born on Saturday 2 April, 1927 & died at home on Sunday 28 Nov, 2021. She was the 4th of 9 children born to Clarence L. & Bina (Flanzburg) Wetzbarger of Brush Co. & grew up in and around Englewood, Co. In 1944, contributing to the war effort, and being awarded the Army - Navy Production award for excellence in war production from Heckethorn Mfg. & supply by loyal effort & efficiency was a proud moment for her, so in the spring of 1945 she left for California where she entered and won a "Name the Program" radio contest from KFXM Lee Brothers Broadcasting Co. Living in Redlands CA., working for Hotel Casa del Rey she made a vast number of friends and allowed her to be closer to her brother's Naval training. Through mutual acquaintances she met & married Everett J. Fritz in Raton, New Mexico on 20 May 1950. They made their home in Federal Heights where Everett & his brother Jay built houses. They spent the remainder of their lives in the home she so loved in Arvada, Co. Everett preceded Velma in death on 28 Dec, 1987; also preceding her in death were her parents; 4 sisters (Lona Herrmann, Nadine Ruby, Nita Royce & Merilou Leadabrand); 4 brothers (Richard, Clarence Jr "Dutch", Harold & Kenneth) and her beautiful granddaughter Erin Fritz. (Velma's mother Bina was just 49 when she died so she never saw Velma get married a year later and get to know their 5 children, Richard was 7 when he died in a tragic accident and Harold died in a fire, all of which caused her great sadness.) In later years she revisited the areas she grew up in and held those memories tight even when the landscape changed. She loved working with her hands making things, sewing, carpentry, yard work & gardening, in her leisure she read autobiographies, history books and magazines. She always thrived in making sure anyone coming through her doors left with a full stomach and loved to cook for those who were hungry. She made the best Chocolate Chip cookies and made sure others (like the men picking up the trash) received them often and she spent holidays baking for her family and friends. She loved the home she made for her children and took pride in her flower & vegetable gardens. She missed her dogs Shamika, Sailor, Charlie & recently Cricket, cats Princess & Katie. She so loved her grandkids & great grandkids. Survivors include 4 sons David (Kathy) of Montrose, Co., Dennis of Arvada, Co., Jerrold (Nancy) of Golden, Co., Lawrence of Arvada, Co. and daughter Susan (Dennis) Overman of Lincoln NE.; 6 grandchildren Erik (Jordan) of Brighton, Co., James(Nicole) Overman of Lincoln, NE., Jennifer Overman of Denver, Co., Matthew (Aimee) Fritz of Littleton, Co., Lucas Fritz & Hannah Fritz of Golden, Co.; 8 great grandchildren Justin Overman, Aylla Fritz, Kyra Fritz, Kailey Overman, Macee Fritz, Virginia Fritz, Daisy Fritz & Felix Fritz; and Sister-in-law Ellen (Kenny) Wetzbarger of Englewood, Co. along with several nieces & nephews.

Velma "Sandy" Mae (Wetzbarger) Fritz Velma was born on Saturday 2 April, 1927 & died at home on Sunday 28 Nov, 2021. She was the 4th of 9 children born to Clarence L. & Bina (Flanzburg) Wetzbarger of Brush Co. & grew up in and around Englewood,... View Obituary & Service Information

The family of Velma (Sandy) Mae Fritz created this Life Tributes page to make it easy to share your memories.

Velma was born on Saturday...

Send flowers to the Fritz family.