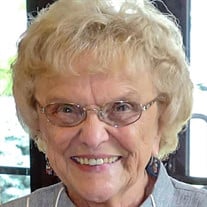 Sharon Delphine Strus, of St. Clair Shores, Michigan passed away on December 16, 2021 with her son, Mark by her side. Sharon, originally named Delphine Janette Parzych, was born to the late Stanley and Frances (Paskett) Parzych on June 16, 1943 in Jackson, Michigan. The granddaughter of Polish Immigrants on both sides of her family, her Polish heritage and Catholic faith were a source of pride and self-identity. Sharon shared her childhood with her older brother, Ron, and younger sister, Virgilene, growing up next to the Parzych Hardware store owned and operated by her hardworking parents. At the young age of 13, she left home to attend high school at the Detroit Felician Academy, a boarding school for girls pursuing a religious vocation. She attended Madonna College where she made her final vows as a Catholic nun, becoming Sister Mary Sharon. At Madonna, she earned a bachelor’s degree in Biology, which she later pursued into a master’s degree in Education from Michigan State University. A natural teacher, due to her great patience and love for learning, she spent forty (40) years of her life educating grade school children. Twenty (20) of those years were spent at Damon K. Keith Elementary school in inner-city Detroit, primarily teaching 2nd Graders in Classroom 201. She regularly kept in touch with former students who remembered her fondly for her ability to make learning fun. Sharon left the convent at age 26 and enjoyed a renaissance of her suspended youth. She loved to dance, listen to folk music, and travel. When a local Polka band needed a skilled accordion player, she leapt at the chance to tour Poland. Captivated with Polish culture, she returned to Poland and caught the eye of her tour bus driver, Zygmunt, who offered to personally take them on an extended tour of Hungary and Czechoslovakia. The budding romance was sustained overseas through hand-written letters, and when Zygmunt visited her in the United States, a whirlwind courtship culminated in a proposal and their legal marriage at Civil Court in the winter of 1978. The following summer they celebrated the Sacrament of Marriage at the Patronage of St. Joseph, where Sharon served as the school’s Principal for 9 years. In 1980, Sharon welcomed her first and only son, Mark. She thrived in her new role as a mother and wife, selflessly and tirelessly acting as the family breadwinner and homemaker. Her dedication to her family was always a central part of her life. She never missed a soccer game, band concert, or an opportunity to proofread an English class essay. In retirement, Sharon was blessed with three grandchildren, Solana, Mateo, and Santigo, the gift of her daughter-in-law, Liddy. She thrived in this new role as “Babcia” where she spent countless hours playing, teaching, and rediscovering the wonders of the world through each child’s eyes. In 2014, after a multiple myeloma diagnosis, she focused even more of her time making indelible memories with her grandchildren. She shared her great loves of travel and learning, taking individualized trips to several states with each grandchild. Whether Sharon was volunteering, promoting social justice, or simply engaging in thoughtful listening, she was always kind and positive, and quick to share a laugh. Her warm spirit and humble servitude will live on in the innumerable lives she affected through many years of teaching and friendship. A liturgical celebration of Sharon’s extraordinary life will take place at St. Joan of Arc Catholic Church at noon on December 30, 2021. The service will be available live and on-demand at http://livestream.stjoan.church. In lieu of flowers, memorial contributions may be made to Sharon’s favorite charities: Karmanos Cancer Institute (https://bit.ly/SharonKarmanos), Gildas Club Metro Detroit (http://bit.ly/SharonGildas), Innovating Health International (http://bit.ly/SharonIHI), Felician Sisters of North America (http://bit.ly/SharonFelician), St. Joan of Arc Catholic Parish (http://bit.ly/SharonSJA) If you miss Sharon’s voice and would like to hear about her amazing life in her own words, be sure to visit http://bit.ly/sharonstrus.

Sharon Delphine Strus, of St. Clair Shores, Michigan passed away on December 16, 2021 with her son, Mark by her side. Sharon, originally named Delphine Janette Parzych, was born to the late Stanley and Frances (Paskett) Parzych on June 16, 1943... View Obituary & Service Information

The family of Sharon Delphine Strus created this Life Tributes page to make it easy to share your memories.

Send flowers to the Strus family.