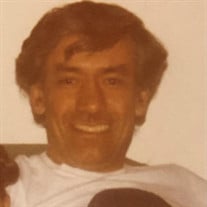 Rafael Guadalupe Davila was born on January 3, 1931 to Manuel and Beatriz Davila in Julesburg, Colorado. Rafael lost his father at an early age. He worked at the local supermarket delivering groceries to customers, shining shoes at the local barber shop, to working the fields to help his mother make ends meet. Rafael finished high school and enlisted in the Navy on June 29, 1951, and served until June 28, 1955, aboard the USS Magoffin during the Korean War. After the war, he returned to Julesburg, Colorado where he met his wife Elsa Garcia.  Elsa and Rafael were married on June 29, 1957, in Gibbon NE. They moved to Denver CO where they started their family and placed roots. Rafael attended Parks Business College while working at Gem’s Market. He later worked at Safeway through the early 1970's, until he acquired his own rubbish removal business for over 30 years and retired at the age of 70 years old. Rafael was a devoted husband and family man, hard-working, and patient with a quiet sense of humor. When he wasn’t running his business, you could often find him in the kitchen listening to Hank Williams, George Jones, Marty Robbins, Merle Haggard, and other country artists. Along with pulling wire from electronics that he found on his removal runs, paying attention to the news, and lending an ear to his “Pollita” (his term of endearment for Elsita) while she talked about various topics and or family gossip. He is one of the last generations of gentlemen who supported his wife and family with his wisdom, integrity, honesty, and strength. He could fix anything he got his hands on. He was a man of few words but when he spoke, he grabbed everyone’s attention.  Rafael also enjoyed old cars and was a bit of a collector. On top of that, he loved sharing what a good deal he got on any of his new collections. He was good with managing his money and took pride in buying things with cash vs credit. Still, this didn’t mean he didn’t have fun. One of his favorite pastimes was going to the casinos in Blackhawk to try his luck, most of the time he won.   Rafael left this earth on November 20, 2021, to join the Lord in heaven. He is preceded in death by his parents, Manuel and Beatriz Davila; his beloved wife, Elsa Davila of over 63 years; siblings Mary Davila, John Davila, Teresa Davila, and Alice Garcia; along with his sons Ralph J. Davila and Randolph L. Davila. He also joined his in-laws in heaven, Richard Simpson, Richard Cortez, Magda Contreras, and Phoebe Davila. He is survived by his brother, James Davila (Sandy); children Lillian Davila (Antonio Cardenas); Judy Quijada, Roderick Davila (Annette Rivera) and Lydia Davila (Jesus Morales); several grandchildren and great grandchildren; in-laws Leo Garcia, Viola Cortez, Ezekiel Contreras, Nora & Ross Guzman, David & Pat Nuncio, Saul & Yolanda Nuncio, Liz and Gene Conroy, Samuel & Reynalda Nuncio and Naomi & Dennis Rivera.

Rafael Guadalupe Davila was born on January 3, 1931 to Manuel and Beatriz Davila in Julesburg, Colorado. Rafael lost his father at an early age. He worked at the local supermarket delivering groceries to customers, shining shoes at the local... View Obituary & Service Information

The family of Rafael Guadalupe Davila created this Life Tributes page to make it easy to share your memories.

Rafael Guadalupe Davila was born on January 3, 1931 to Manuel...

Send flowers to the Davila family.