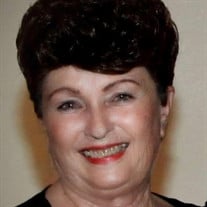 Patricia L. Nicholas was born in Denver, Colorado on December 15, 1944, to Wallace and Maxine Dare. She was raised with two brothers, Ron Dare (Judy) and Gary Dare (Sherry). Her loving husband, Larry preceded her in death on April 4, 2021, after 56 years of marriage. She is survived by her son Nick Nicholas (Teresa), Cindy Mixon (David) and Kelly Nicholas (Tammy). She had all grand-daughters, CJ, Kayla, Nicole and Darby, and one great grand-son, Levi, along with many nieces and nephews. Patti began studying with Jehovah’s Witnesses in 1976 and was baptized on June 5, 1977, followed by Larry on April 23, 1978. She remembered that her mom studied off and on when she was younger. While She worked for Mountain State Bell Phone Company when she met the man of her dreams Larry Nicholas. Patti was visiting with Larry’s sister Linda, when Larry walked through the door with powdered sugar all over his face from where he worked at Great Western Sugar Company. She said after seeing him that she was going to marry him. After only 5 dates they were married on December 18, 1964. (She would NOT recommend that today!) The next year they welcomed their first son Lawrence (Nickie/Nick) into their family. Four years later Cindra (Cindy/Sis), at the age of 10 weeks old became their daughter. Their family was completed only 11 months later with the arrival of Kelly (Figgy/Kel), nine kids short of the 12 that Larry wanted. As you have noticed the family all have nicknames and everyone else was called, “hon.” If you were ever around Larry and Patti, you would have heard them call each other “Pitty” and “Poopus.” They valued their family time together and had many adventures that would make you wonder how they survived them all. Patti loved to be behind the wheel of the family motorhome and would drive from coast to coast with the whole family in tow looking for the next adventure. If you were ever invited to go with the family on one of their trips you knew that it would be a memorable vacation with something eventful happening. Patti was known for telling the many family stories, and there were many of them to tell. When Patti was younger she remembered that her mom studied the Bible off and on with Jehvoah’s Witnesses. On one occasion while visiting with her mother in the hospital, she met Glada, who waswas a Jehovah’s Witness and who had studied the BibleBible with her mother. Little did Patti Patti know that meeting Glada changed the direction of her life forever because she also started studying the bible with her in 1976. She was baptized on June 5, 1977, followed by Larry on April 23, 1978. Shortly after their baptism, the family moved to Summit County. They then moved to California for four years where she started pioneering and that was her career. They then moved back to Summit County. They ended up living in Las Animas and LaJunta where they continued to pioneer together. She pioneered for over 35 years, and she loved the ministry and helped many to come to learn about Jehovah. Larry and Patty dedicated their lives to serving Jehovah. They offered themselves willingly and received many privileges such as; working on the new branch facilities in the Bahama’s, set-up and tear-down on Kingdom Hall projects for the RBC/LDC, disaster relief work in New Orleans, and in the Purchasing Department for the Aurora Assembly Hall. One of the many treasures she taught her kids was that everything they have comes from and belongs to Jehovah, and that He came first in their lives. She and Larry lived that truth!! There was no doubt how they felt about the brotherhood, and they were always there to help in any way that they could. Her focus was always in putting Jehovah first and teaching people bible truths. She truly lived her life as a servant of Jehovah and set a fine example in doing so. She was a dear wife, mother, aunt, grandma and friend to everyone she met. She will be dearly missed, and we look forward to when all those in the memorial tombs will hear Jesus words, “Come out!” (John 11:43) Patti Nicholas Memorial Time: Jun 12, 2022 03:00 PM Mountain Time (US and Canada) Join Zoom Meeting https://us02web.zoom.us/j/85357478194?pwd=SlIwb2p4N0pSTFlVakZ1cmFzUWdjZz09 Meeting ID: 853 5747 8194 Passcode: 826652 Mobile Phone: +1 669 900 6833 US +1 253 215 8782 US Meeting ID: 853 5747 8194 Passcode: 826652

Patricia L. Nicholas was born in Denver, Colorado on December 15, 1944, to Wallace and Maxine Dare. She was raised with two brothers, Ron Dare (Judy) and Gary Dare (Sherry). Her loving husband, Larry preceded her in death on April 4, 2021,... View Obituary & Service Information

The family of Patricia Lorine Nicholas created this Life Tributes page to make it easy to share your memories.

Patricia L. Nicholas was born in Denver, Colorado on December...

Send flowers to the Nicholas family.