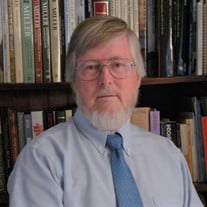 Michael Hamilton, June 1, 1946 - June 22, 2021 Michael Seymour Hamilton, age 75, of Berthoud, CO, passed away from leukemia on June 22, 2021 at The Denver Hospice after a brief illness. He was born in Ithaca, NY, to Harry and Ellen (Moore) Hamilton. He spent summers at his grandparents’ dairy farm, attended college in the Midwest, and worked as a carpenter, motorcycle mechanic, and motorcycle messenger in midtown New York. In the 1970s Michael learned to be an accomplished leather craftsman in Cincinnati, then moved to Denver, where he owned a retail leather goods shop named The Hired Hand, near Washington Park, and created leather clothing, accessories, and sandals. Michael returned to academia at Colorado State University, where he earned a B.A. (summa cum laude), M.A., and Ph.D. in political science (1984), specializing in environmental and natural resources policy. He also attended Syracuse University Law School for a year. During his long career as a professor of political science, he taught at the University of New Mexico, the University of Wyoming, and CSU, and spent 27 years at the University of Southern Maine, teaching thousands of graduate and undergraduate students to be capable public servants. His courses included Environmental Politics & Policy, Public Administration, and American Public Policy Making. While at USM he was department chair and served on Faculty Senate, committees university-wide, his faculty union, and professional and community organizations. Michael wrote 10 books, most notably Energy Policy Analysis and Mining Environmental Policy, and hundreds of scholarly and popular articles. He spent two years in Washington, DC on the staff of the U.S. Office of Surface Mining Reclamation and Enforcement, the agency that regulates surface coal mining. He served for ten years as program analyst and author of agreements between the U.S. Department of Interior and Indonesian Ministry of Mines & Energy to reduce the environmental impact of coal mining on rain forests. In 2012, upon retirement from USM as Professor Emeritus, he returned to Colorado and leatherworking, selling his creations online as The Hired Hand once again, to an international clientele, and continued teaching courses through CSU Online. Michael enjoyed snorkeling, birds and wildlife, music, antique tractors, gardening, and planting trees to beautify his land and neighborhood. He was married to Carol Jean Boggis, whom he met at his leather store and to whom he was devoted for 50 years. Together they designed and built their solar home in Berthoud in 2014. Carol survives him, as do his brothers Timothy and Eric Hamilton, sister Heather Ebert, and in-laws Theresa Boggis, Randall Boggis, and Laurie and Doug Clifton, and five nieces and nephews. In lieu of flowers, contributions may be made in Michael’s name for preservation of endangered species or coral reefs to the National Wildlife Federation, Nature Conservancy, Ocean Conservancy, or Plant a Million Corals.

The family of Dr. Michael Seymour Hamilton created this Life Tributes page to make it easy to share your memories.

Send flowers to the Hamilton family.