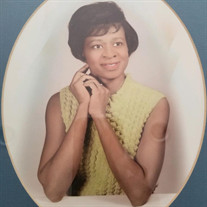 Born on March 27th, 1930, in Suffolk, Virginia to parents Lemuel and Margie Bernard, Margie was the youngest of two children, born 12 years after her brother Floyd Douglas Landers. Unfortunately, her father died in a tragic accident when she was 3 and she was raised by a single Mom through the rest of her young life. Margie grew up in a strict Christian home and when the doors of the church were open, she was there as her Mom played piano for the church. Margie graduated in 1947 from Booker T. Washington High School and enrolled at Hampton Institute after graduating. While her future husband Leroy Beasley Jr. pursued her relentlessly after he enlisted in the Air Force, Margie’s Mom insisted that she finish college before getting married. She waited five long years to graduate with a Bachelor’s of Science degree from Hampton Institute before she accepted his proposal and got married in 1952. As it turns out these two had known each other since fourth grade, but they did not get sweet on each other until they were juniors in high school. They had assignments in Virginia, England, Texas, New York and Michigan. Their four sons, Ronald, Reginald Lamont, Alan Douglas and Kevin Leroy were born during their assignments in Virginia, England and Texas. Something that all her sons remember was her passionate pursuit of education. Determined to get her Master’s Degree, Margie spent multiple summers enrolled at Syracuse University, Eastern Michigan University and Central Michigan University in pursuit of her Masters. Margie’s son Kevin actually has memories of apartment living while his Mom attended Central Michigan during the summer. Margie was awarded her Master’s of Science degree in Special Education from Central Michigan in 1977. She was often teased by her friends that she needed that degree to ride herd over her four sons. One of Margie’s special skills that came in handy when she was raising her sons was her ability to sew, especially when the guys were young. She was an accomplished cook who loved variety and also gifted in arts and crafts. Margie achieved brown belt status in Judo which helped her manage her sons while Leroy was away on assignment. Margie taught in the Rome New York, Oscoda Michigan and Denver Public School systems for over 30 years and retired from full-time teaching in 1992, although she continued to substitute teach for several years. She took particular pride in helping the next generation of teachers acquire classroom skills and was sought out by the administration to help build and evaluate programs especially when it involved the training and teaching of persons with disabilities. Everyone that knew Margie knew that there were two hobbies that she really enjoyed doing on a regular basis – bowling and heading up to the hills in an to attempt to build wealth. Margie was an avid bowler for decades and truly enjoyed being a member of the Strikettes bowling club which she joined in 1983. Her highest average was 168, she continued bowling well into her 80s and traveled extensively with the club. Many weekends Margie would head up to the foothills west of Denver to build her skill at the casinos. Turns out she was pretty good at it and there are numerous certificates verifying her expertise and success. She and Leroy enjoyed many weekends at the mountain home that they purchased in the 1980’s and also loved playing cards with their friends into the wee hours of the morning. Margie was preceded in death by her husband of 67 years, Leroy Beasley Jr., her father Lemuel Bernard, her mother Margie Bernard and her brother Floyd Douglas Landers, her son Ronald Beasley and two grandsons, Reginald Leroy Beasley and Kevin Leroy Beasley Jr. She is survived by Ronald’s family and sons Reginald, Alan, Kevin and their families and nephew Marcus Ballard and his family. Please join us as we celebrate and honor Margie on Saturday, July 31, at the Prince of Peace Temple, located at 1590 Elmira St., Aurora, Colorado 80010. Viewing will be at 10:30 and the service will start at 12:00. For additional information please visit www.abplace-funeral-cremation.com.

Born on March 27th, 1930, in Suffolk, Virginia to parents Lemuel and Margie Bernard, Margie was the youngest of two children, born 12 years after her brother Floyd Douglas Landers. Unfortunately, her father died in a tragic accident when she... View Obituary & Service Information

The family of Margie Beasley created this Life Tributes page to make it easy to share your memories.

Send flowers to the Beasley family.