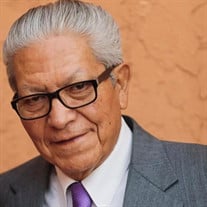 Louis Anthony Ford passed May 5, 2022 at the age of 84 at Porter Hospice in Centennial, Colorado. Louis was born in Raton, New Mexico on December 16, 1937, to Esther &amp; John Ford. He is survived by his wife of 63 years, Mary Alice Ford, his... View Obituary & Service Information

The family of Louis Anthony Ford Sr. created this Life Tributes page to make it easy to share your memories.

Send flowers to the Ford family.