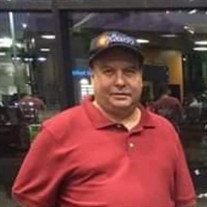 Kenny Andrew Lucero was born in Denver, Colorado on February 5, 1958 to Andrew and Rosie Lucero. He entered into his eternal home April 15, 2021. He graduated from Mapleton High School in 1976 and then attended Denver Institute of Technology and earned his degree with automotive in 1978. In 1984 he married Sheila Miller in Aurora, Colo. He and his new bride moved to Albuquerque, NM where they gave birth to their daughter. Later on moving back to Denver, Colo. and started his own Business. Later in years he gained four wonderful grandchildren and spending time with them was one of the high lights of his life, from buying crafts from his oldest grand daughter, going for milk shakes at Great Scott's, attending band concerts, softball games, watching movies or cracking jokes. He Loved each of them. He was the life of the party, but was always the guy behind the camera capturing the precious family moments. He and his little Brother were best friends in life, they worked very close together, and even took care of each other. They enjoyed attending the drag races at Bandimere, and coming up with ideas for future builds, for around the house and just having brother time together. Two heads are better then one and when those two got together in was like engineer magic. Muscle cars, drag racing, and building cars from the ground up was his passion and him and rod shared in this endeavor. He enjoyed living to the fullest and had many skills. Give him an idea and he could build anything for you, or fix it, that came from his handy man trade. He loved to laugh, and he found humor in all areas of life. He enjoyed conversations with his mother and numerous other family members at the family home. He is survived by his daughter, Alissa Luethy (Donnie) his Mother, Rosie, his Brother Rodney Lucero and four grand children: Karinda (18), Logan (15) Alexa (13) Donovan (10). Numerous Aunts, Uncles and Cousins and many friends. He is preceded in death by: Sheila Mai Miller (former wife) and best friend. Father: Andrew Lucero, sister: Donna Lee Lucero. Grand parents: Tobias and Rebecca Martinez Eliseo and Virginia Lucero Many Aunts and Uncles and wonderful Cousins. Join us for his last ride; The memorial service is as follows: Friday, April 30, 2021, 2:00 p.m. Reception immediately following until 5. Legacy Christian 9200 Hoffman Way Thornton, CO 80229

Kenny Andrew Lucero was born in Denver, Colorado on February 5, 1958 to Andrew and Rosie Lucero. He entered into his eternal home April 15, 2021. He graduated from Mapleton High School in 1976 and then attended Denver Institute of Technology... View Obituary & Service Information

The family of Kenny Andrew Lucero created this Life Tributes page to make it easy to share your memories.

Kenny Andrew Lucero was born in Denver, Colorado on February...

Send flowers to the Lucero family.