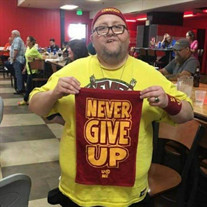 Joseph Allen Cummins, 44, of Northglenn, Colorado went to his heavenly home to be with Jesus on January 20, 2022. Joe was born on December 8,1977 at the University of Colorado Medical Center in Denver, Colorado to Laura and Doug Roth. Laura later married Kevin Cummins in 1987 and Kevin lovingly adopted Joe and Matt and raised them as his own. From a very young age, Joe fell in love with Superman, Batman, the Incredible Hulk, Spiderman, He Man, Power Rangers and the Teenage Mutant Ninja Turtles. He spent much time playing with and collecting action figures. Joe was also quite passionate about rock and roll music, singing karaoke, playing video games, and watching WWE, superhero shows and the Karate Kid. Joe met his best friend Rob Baker when they were 8 years old at school. They lived in the same neighbrhood, and spent much time together. They shared many common interests and remained best friends their whole life. Rob has lived with us most of his adult life, and was more like a brother to Joe than a friend. Joe and his brothers were raised in a home with several daycare children. They shared their dad and mom, their toys and their home. Joe throughly enjoyed this as he loved children and especially babies. One of the daycare children Kali often referred to Joe, Matt and Chris as her big brothers. Joe graduated from Thornton High School in 1997. He lived in Northglenn, Colorado his whole life, and was a Colorado Native. Joe loved going to the mountains. He enjoyed the nature and fresh mountain air, and the peace and serenity that he found there. His favorite place was Glenwood Springs. He loved swimming, and later bought a hot tub. He had the biggest heart and cared about everyone. Joe had a wonderful sense of humor and got tickled easily, just like his niece Sierrah. Loving him was easy, losing him was hard. He is survived by his parents Laura, Cummins, Kevin Cummins, Janet Jubenville and Doug Roth. Joe is also survived by his brothers Matt and Chris and step brother Ryan (Diana) and stepsisters Cierra (Sean) and Sarah (Stephen). His best friend Rob Baker and his nieces and nephews, Sierrah, Briella, Charlie, Caroline and Paislee. All of whom he adored! He was also survived by many other loving family members. Joe was preceeded in death by his grandparents Al and Velma Hunter, Charles and Lela Cummins, Jack and Dorathy Roth, his aunts Linda and Sally, his uncle Jerry, his cousins Pam and Eddie and many other cherished family members.

Joseph Allen Cummins, 44, of Northglenn, Colorado went to his heavenly home to be with Jesus on January 20, 2022. Joe was born on December 8,1977 at the University of Colorado Medical Center in Denver, Colorado to Laura and Doug Roth. Laura... View Obituary & Service Information

The family of Joseph Allen Cummins created this Life Tributes page to make it easy to share your memories.

Joseph Allen Cummins, 44, of Northglenn, Colorado went to his...

Send flowers to the Cummins family.