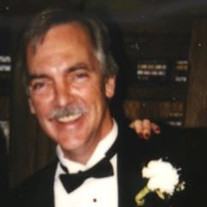 John Van Sciver was born on December 21st, 1945 in Philadelphia, Pennsylvania to Mary Gould Paul and Wesley Johnson Van Sciver. He passed away peacefully at Denver Hospice on May 19th, 2021. He was 75 years old.  John is survived by his wife of 22 years, Carolyn Van Sciver; his two daughters, Rebecca and Sarah, his grandchildren, Paul Van Sciver and Elijah Schatz; his sister, Rebecca and her children, Jenifer and Mihai; his brother Steve and wife, Mary and their children Travis and Courtenay; and stepdaughter, Shannon Scott and husband Mark, and sons Liam and Gavin. John was born into a lineage of physicists, engineers, artists and dancers and these influences colored much of his life. He graduated from Lehigh University with a B.S. in Civil Engineering and subsequently received both a M.S. in Civil Engineering and an MBA (Finance) from the University of Colorado.  He served in the USAF as an officer from 1969 to 1974 where he was stationed on Shemya Island and in northern Italy. Upon his return to the states, John worked as a senior engineer for Martin Marietta Aerospace Cooperation before going to work for the Colorado State Engineer’s Office, Dam Safety Branch, working as a supervising water Resource Engineer. In addition to his engineering work, John served on the Board of Directors for the Colorado State Employees Credit Union for 36 years. John had a passion for preserving old houses and historic neighborhoods, including his 1900 home in Denver and a bowling alley in Victor. More recently John was engaged in neighborhood preservation as a community activist. His last project was advocating for preservation of the Denver’s City Park Golf Course.  John was well loved and respected by friends and family and was known for his “sparkling” smile. He had a goofy sense of humor, an outgoing personality and enjoyed interacting with people. From small-town USA to Europe, Russia and New Zealand, John enjoyed getting to know the local people and learning about their culture and language. When traveling, he would always opt to stay in a bed and breakfast and learn about the history of the house and family business. He also loved entertaining and throwing parties at his historic home in Denver built in 1900. John had a zest for life and was able to create an adventure wherever he went. He was very active, outdoorsy, athletic and passionate about skiing, running, rafting, camping, and hiking in the mountains. John was known as being a ‘human calculator,’ who enjoyed doing math for fun.  John counted two items on his bucket list - building a cabin in the mountains and rafting the Colorado River like his hero and name sake John Wesley Powell. He proudly built his small cabin in the mountains where he spent many days with family and friends. In 2017 John joined a rafting trip down the Grand Canyon, scratching off his second bucket list item. John will be dearly missed by his family and friends. In lieu of flowers, please send donations to either the Alzheimer’s’ Association or The Denver Hospice.

John Van Sciver was born on December 21st, 1945 in Philadelphia, Pennsylvania to Mary Gould Paul and Wesley Johnson Van Sciver. He passed away peacefully at Denver Hospice on May 19th, 2021. He was 75 years old.  John is survived by his wife... View Obituary & Service Information

The family of John Wesley Van Sciver created this Life Tributes page to make it easy to share your memories.