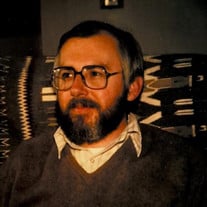 John Douglas Lane, 74, was found deceased in his Centennial, CO home on Saturday, June 4, 2022. Son of Helen (Douglas) and Aaron Joseph "Joe" Lane, John was born in January 1948 in Belleville, Kansas where he completed elementary and high school (BHS, class of 1966) before attending Kansas State University, Manhattan, KS. He graduated Cum Laude with a bachelor’s degree in Civil Engineering, a minor in Mathematics, and a master’s degree in Structural Engineering. He was a member of the ASCE (American Society of Civil Engineers). In high school, he was proudest of two gold medals won at state contests for a woodwind quintet and a French horn quartet. Other fond memories were of the Methodist church youth group, 4-H, correspondent art lessons, and Boy Scouts of America, including camping, earning the rank of “Life” and the Order of the Arrow award, and attending summer camp at Philmont Scout Ranch, NM. During his college summers, he worked at the North Central Kansas KSU Experiment Field near Scandia, KS and for the Kansas Department of Transportation helping with I-135 construction around Salina, KS. His work for KDOT followed in the footsteps of his paternal grandfather, a highway department foreman in the 1930s, his father and brother, who also helped build and repair Kansas highways. After college, he lived and worked around San Diego, California and in Washington State, but mostly in the Denver, CO area designing elevated temperature coal and natural gas power plant equipment (boilers, ductwork, and heat exchangers) and their supporting structures and foundations. His expertise was hot steel design. John found California too dry, Washington too rainy, but Denver just right. His retirement winters were filled thinking about unsolved physics problems. He often wished he had known in junior high what he knew then about science. Summers provided time for biking, gardening, and other outdoor activities. He enjoyed camping, hiking, and cooking out with the family in his younger years. Love of nature is something John learned from his parents and passed onto his own children. John was always looking for teachable moments to share his wisdom, skills, and complex thoughts with others. He was very talented in sculpting, sketching, and watercolor—almost anything he set his mind to do! He also liked cooking and occasionally sewing—he once made his own family room curtains. Studying Einstein's theories filled much of his time in his later years. John suffered from physical problems from birth, which led to intermittent emotional difficulties throughout his lifetime, sometimes making it difficult for him at times to deal with the resulting pain, depression, and anxiety. He was preceded in death by his parents; stepfather, Douglas E. Clarke; older brother, Aaron James “Jim” (Sandra) Lane; and two older sisters, Katherine (Gregory) Carchidi and Patricia (Tom) Dutton, as well as their spouses. He is survived by his former wife, Carole Pearson Lane, Englewood, CO, and their children, Janice (Rob) Gossman, Clifton Park, NY; Jennifer (John) Cicero, Colorado Springs, CO; and Steven (Laurel) Lane, Lakewood, CO; eight granddaughters and four grandsons; younger sister, Mary Jo (Dale) Hawkinson, Manhattan, KS; and numerous cousins, nieces, and nephews, as well as many friends and former classmates. A memorial service will be held at 2 p.m., Thursday, June 23, 2022 at Academy Christian Church Northside Campus, 1635 Old Ranch Rd., Colorado Springs, CO 80908, with Pastor Bryan Myers officiating. Donations in John’s name may be sent to the church. Arrangements were made through A Better Place Funeral and Cremation, Denver.

The family of John Douglas Lane created this Life Tributes page to make it easy to share your memories.

John Douglas Lane, 74, was found deceased in his Centennial,...

Send flowers to the Lane family.