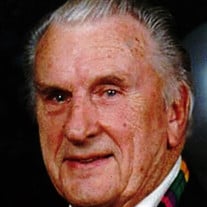 HAROLD S. “TOMMY” THOMPSON Harold Sinclair “Tommy” Thompson, 103, died Tuesday, April 20, 2021, at Sunrise Living Center in Westminster, CO. With his passing, we lost an oak tree of a man--a storyteller from the past, a mentor in life to most (our Papa to all). Tommy went to his Heavenly Home to join his beloved wife, Rosemary, a daughter, Maureen, and many loved ones. A native of Egypt, MS, he was born January 12, 2018, to Andrew Virgil Thompson and Maude Stillman Thompson. Tommy grew up in the community of Egypt, MS, which, at the time was a thriving farming and commercial center with two large general merchandise stores. One of these stores, owned by his father, was to play a central role in Tommy’s life and form the basis for many of his stories which later made their way into two books he wrote and had published: Memoirs of a Mississippi Country Boy Way Back and A Dawg’s Gotta Run…Country Boy Goes West!. From his early life on the farm and store, Tommy was noticed by Dudy Noble of Mississippi State fame and recruited to play football—a game that Tommy had never played before! Tommy “thrived” in the college world of Starkville—both in the college life and sports. He was a member of Phi Sigma fraternity. After college, Tommy lived in Memphis and met the “Love of his life”—Rosemary—while working at a war production plant. This happy union of a “city gal” (New Orleans) and “country boy” resulted in five children who “filled the Egypt school.” Tommy pursued a life of farming soybeans, cotton, corn, gardening, and running the large general merchandise store in Egypt for a number of years. He was a mecca for conversation, a slice of cheese, bologna, a cracker and soda and, whatever goods the community required including, those down on his or her luck during those depression years. As the general store faded into progress, Tommy entered the pants manufacturing business in Okolona as an engineer. He eventually became Plant Manager of Meadow Sportswear employing, several hundred skilled workers. A young Ralph Lauren was an early customer. When that work moved offshore, he was picked to start and run the Mississippi Dept of Agriculture’s Mirex ® fire ant bait plant in Prairie, MS—at that time, this plant had the distinction of being the only facility in the country that made this product. Tommy had a busy work life into his seventies working for the State Agriculture Department. During those years, he found the time to help Rosemary raise five active kids through college, serve on both the Okolona Draft, School, and Hospital Boards, Lion’s Club Member and, active participant in the choir, usher, and Knights of Columbus in the Aberdeen Catholic Church. He was a Senior Member of the American Institute of Industrial Engineers. The couple lived a number of years in Natchez Trace Villas north of Tupelo. His love, Rosemary, passed away in 2011 after an extended fight with cancer. Life took another big, big turn in 2016 when he was offered a chance to explore the west with a move to his daughter’s (Eileen) and son-in-law’s (Kevin) home in Westminster, CO. He was a young 98, with an electric scooter chair and ready to explore! Festivals, food fairs, museums, botanical gardens, and trips into Wyoming. At the age of 100, Tommy sampled the thrills of the Twister II wooden roller coaster at Lakeside Park in Denver. This active lifestyle extended his life beyond all expectations. He grew to be the oldest member ever in his family and likely the most senior living member of the Mississippi State Bulldog “M” Club! He is survived by four of his children: Daughter Kathleen (Ray) of Tupelo, MS; son Hal (Susan) four children, of Decatur, AL; daughter Eileen (Kevin) two children of Westminster, CO; and daughter Colleen (Phillip) four children of Belden, MS. His beloved daughter, Maureen, was taken in 1995, leaving two children. A host of grandchildren numbering 12 and great-grandchildren numbering 12 survive as well as two nephews and a niece. Rest in Peace, dear Daddy, Papa, Pop-- we will not see your like again in this life… A memorial service is in the planning stage with internment at Lee Memorial Park in Verona. Remembrances may be shared at https://www.abplace-funeral-cremation.com/obitituaries/Harold-Thompson-26/ Donations may be sent to St. Jude’s Children’s Hospital.

The family of Harold Sinclair Thompson created this Life Tributes page to make it easy to share your memories.

Send flowers to the Thompson family.