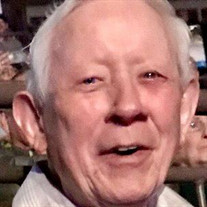 On December 29, 2021, Harold Longsworth peacefully entered the Kingdom of Heaven after a valiant and inspirational fight with Parkinson’s Disease. Throughout his battle, he displayed great courage, never lacking a profound reliance in God’s providence. He died while at home, pain-free, and surrounded by his loving family. Harold was born in the small community of Chelyan, WV on June 22, 1935. He was the second child of four, born to Wellington Ernest and Kathryn Vickers Longsworth. Harold joined the US Army Reserves (now the Army National Guard) in January 1956 and transferred to active-duty December 1957. He served as a Communications Specialist assigned to the 2nd Battalion 504th Infantry Regiment, 82nd Airborne Division at Fort Bragg, NC. He was promoted to E-5 (Tech Sergeant) July 1959. He was honorably discharged from the Active Army, owing commitment to reserve service until January 26, 1962. Harold married Janice Gayle Hall September 1960 in Handley, WV. There were many facets to this man. He was employed as a draftsman, design engineer, and business owner. Through numerous moves, Harold was completely devoted to his wife, four children, and friends. He had a lifelong love of hunting and a passion for flying his Piper Comanche. Retirement was not taken sitting down. Harold and Gayle became managers of a large Christian camp in Maryland. Harold recently recalled the years spent at camp as the most satisfying period of his employment years. After a second retirement, Harold and Gayle moved to Farmville, VA where he personally built their new home. While here, they were active members of Heritage Baptist Church. He played an integral part in the building of Habitat for Humanity homes. Harold was a Mason from December of 1978 to present. Here he found decades of brotherhood and fellowship with other Christian men. He was Past Master of the Farmville Masonic Lodge No. 41. Over six years ago, Harold and Gayle relocated to Parker, CO to live with his daughter and family. He was a member of the Parker Bible Fellowship Church and their Senior Care Group. Harold was also Gramps to the children of the neighborhood and always welcomed them with a cookie. Harold was known for his open and friendly demeanor, finding friends everywhere he went, and never meeting a stranger. He always had a smile, twinkling blue eyes, encouraging words, wisdom, and an open heart. Harold possessed a vast scope of knowledge. He has a sign in his bedroom: If Gramps can’t fix it, we are screwed. Not only was he a father to four children, but he was also Gramps to thirteen grandchildren and six great grandchildren. Harold is survived by three children, Rebecca Smallwood and Thomas of Parker, CO, with whom he made his home for six years, Steven Longsworth and Donna of Eatonville, WA, and Mary Overacker of Hagerstown, MD. Thirteen grandchildren: James Broadwell of Nashville, TN, Mark Broadwell and Maggie of Avondale, AZ, Amanda Johnson and Eric of South Riding, VA, Anne Lauria and Brandon of Centennial, CO, Jeanette Smallwood and partner Luis Miranda of Denver, CO, Jillian Smallwood of Parker, CO, Kathryn Smallwood of Parker CO, Kristian Nason of Bellingham, WA, Ian Nason of Syracuse, NY, David Nason of Lake Luzerne, NY, Kaitlyn Overacker and partner Anthony of Brooklyn, Morgan Overacker and partner Steven of Hedgesville, WV, and Ryan Overacker of Hagerstown, MD. Six great-grandchildren: Audrey McLaughlin, Blakely McLaughlin, Charlotte Johnson, Theodore Lauria, Kylie Kaufman, and A.J. Noland. He is also survived by brother David and Shirley Longsworth of Nitro, WV and sister Lois Armstrong of Cabin Creek, WV and uncle Thorn Longsworth of Wichita, KS He is predeceased by his parents, Wellington Ernest and Kathryn Vickers Longsworth, wife, Janice Gayle Hall Longsworth, daughter, Elizabeth Broadwell, and sister, Martha Williams. Out of respect to his wishes, there will be no services. Burial will be at Fort Logan Veterans Cemetery at a later date. Any donations should be made to the Wounded Warrior Project.

On December 29, 2021, Harold Longsworth peacefully entered the Kingdom of Heaven after a valiant and inspirational fight with Parkinson&#8217;s Disease. Throughout his battle, he displayed great courage, never lacking a profound reliance in... View Obituary & Service Information

The family of Harold Morris Longsworth created this Life Tributes page to make it easy to share your memories.

Send flowers to the Longsworth family.