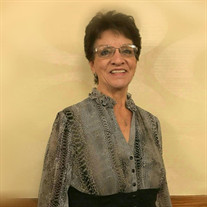 Gloria ‘Jeannie’ Byerrum, also known as Mom, Grandma and Sweet Pea, was a soul filled with the utmost love and compassion. Jeannie was a perfectionist by nature in everything she did. She saw beauty in everything she set her eyes on, which could be felt by her welcoming arms as well as in her painting, knitting and cooking. As a homemaker, you were always welcomed into her house with the smell of home-baked goodies or popcorn on the stovetop. She always had a pot of coffee ready for anyone who came to the door. Born in Rifle, Colorado on February 14, 1946, Jeannie was a country/mountain girl from the start. The simplest pleasures in life brought her great joy. She and her late husband, Bernie, were avid campers in their day, always filling the campfire with games, laughter and the best eats! When camping days became fewer, she would listen to classical music on YouTube with a fake fire that crackled in the background. She had a great love for playing Uno with close family while enjoying her brother’s homemade wines of which she helped pick the grapes. She was even known to race her grandchildren in her powered wheelchair from time-to-time, usually letting them win. Her most recent pastime was coloring. Not just coloring, but COLORING, shading and blending until perfection. Everyone who saw them would swear she had drawn and colored them from scratch! One of her greatest joys in life was being a mother to her sons and grandmother to her son’s children and grandchildren. Jeannie along with her loving husband were both Dedicated Jehovah’s witnesses. Gloria Loved Jehovah and her brothers and sisters, and always talked about the excitement of being reunited with those she loves in paradise on earth. Jeannie passed away on July 31, 2021, at the age of 75 after a courageous battle with ALS. Preceded in death by her husband, Bernard. Survived by her sons Mike and John (Shalee); brothers, Donnie, Eddie (Linda) and Richie (Yvonne); grandchildren, Onalee (Quinton) and Alyx (Matt) Ben and Jenna; great grandchildren, Draven and Tilly; great fur-children, Roxy and Artemis. In lieu of flowers, the family has asked for donations toward the ALS Association Rocky Mountain Chapter, in which you can follow the link below For online donations: https://secure2.convio.net/alsa/site/Donation2?df_id=34740&34740.donation=form1

Gloria &#8216;Jeannie&#8217; Byerrum, also known as Mom, Grandma and Sweet Pea, was a soul filled with the utmost love and compassion. Jeannie was a perfectionist by nature in everything she did. She saw beauty in everything she set her eyes... View Obituary & Service Information

The family of Gloria Jeannie Byerrum created this Life Tributes page to make it easy to share your memories.

Send flowers to the Byerrum family.