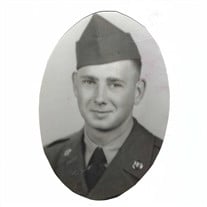 Francis was born on January 30, 1932, to Frank J. Dreiling and Catherine E. Wittman. Francis was the 4th to the oldest sibling; Ervin, Aletha, Melvin, Francis, Norma Jean, Kathleen, Norman, and Darlene. Francis left high school after 10th grade and worked as a Carpenter, Concrete Finisher, and Painter. Was drafted in the Army in November 1952 and was overseas and actively fighting during the Korean War. Returned home to Victoria Kansas until Francis and brother Melvin moved to Denver. Worked for Robertson Brick and Tile and was a Grocery Clerk with Safeway for 27 years. In 1957 he met the love of his life, Erla Frances Dreiling and married on June 21, 1958. What a blind date! Erla had a daughter, Cynthia, from a previous marriage, which didn’t matter to Francis as he considered her as his daughter and the twinkle of his eye! Later they had a son, Clyde Edwin Dreiling, born March 9, 1960. Three years later Carl F. Dreiling was born in December 1963, but only survived a few hours. Francis was outspoken and honest and believed that “A man’s word along with a handshake” was everything! Francis loved camping, motorcycle riding. He made sure he attended his son’s basketball games & did his best to attend his grandsons’ games. Survived by his dear wife Erla of 63 years; daughter, Cynthia & son Clyde (Connie). Three Grandchildren; Adrian (Brenda), Clyde JR., & Jesse (Kately). Six Great grandchildren; Mariah, Gabriel, D’naya, D’Angelo, Cole, Aleea and another to be born in January 2022, (Avaya); Three Great-great grandchildren; Zayden, Mila and Kayla. Love letter to my dear husband Frank Francis F. Dreiling January 30,1932 Why did I choose you? What did I see in you? I saw the heart so full of love which you hid so well. I saw a great man, a quiet man but when you spoke, you said so very much! Why did I want to be with you? What could you offer me? A love to last a lifetime and when I lost my heart so many years ago, I lost it lovingly and willingly to you. Thank you for sharing your love with me. My love grew stronger with every passing year because you made it happen. Love you much, Erla F. Dreiling (Married to Frank on June 21, 1958)

The family of Francis Frank Dreiling created this Life Tributes page to make it easy to share your memories.

Send flowers to the Dreiling family.