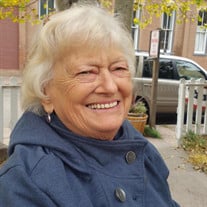 Not sure what to send?

Enid Mae Behrens (nee Little) was born in Fairmont, Minnesota, on June 12, 1933, to her parents Giles and Gertrude Little, and died at her home in Westminster, Colorado, on May 7, 2022, in the presence of her loving daughters, Linda Barbour and Moriah Haley, and long-time friend and nurse, Moira Miller. Enid often told stories of a delightful childhood with friends and family members on her family’s farm near Blue Earth, Minnesota. She attended grade school and high school in Huntley, Minnesota, and college in Mankato. After her time at college, she worked for a few years as an assistant bookkeeper for Railroad Motors of Fairmont, Minnesota. In 1955 she married Leal Behrens, an officer in the United States Air Force. During their miliary service time, they lived on several Air Forces bases throughout the United States. Their first daughter, Moriah, was born in 1964, followed in a short decade by second daughter, Linda, in 1973. Enid remembered fondly being stationed in England for three years and having visited every state in the union. She was also proud of visiting most of the countries in western Europe, along with Russia, Canada, Mexico, and the Caribbean. After retirement from the Air Force, the family moved to the Denver, Colorado, area where Enid worked in several schools, finally settling into a kindergarten teaching position at Bellview Christian Schools where she taught for eighteen years. Enid was loved by students, co-workers, and parents alike. Enid’s special pleasures were snow skiing and playing bridge. She continued playing weekly games of bridge until she was stopped by COVID 19’s isolation. Enid is survived by her daughters Linda and Moriah, her daughter-in-law, Susie Merrin, and her soon to be son-in- law, Patrick Johnson, her sister-in-law Pat Krumwiede, and by many, many, beloved and devoted nieces and nephews. Her funeral will be held at Intercession Episcopal Church in Thornton, Colorado, on Friday, May 27, 2022, at 3:30 pm.

Enid Mae Behrens (nee Little) was born in Fairmont, Minnesota, on June 12, 1933, to her parents Giles and Gertrude Little, and died at her home in Westminster, Colorado, on May 7, 2022, in the presence of her loving daughters, Linda Barbour... View Obituary & Service Information

The family of Enid Behrens created this Life Tributes page to make it easy to share your memories.

Send flowers in honor of Enid.