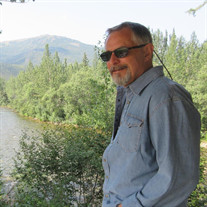 Clark Johnston, 70, of Denver, passed away on Wednesday, December 22, 2021, at The Denver Hospice Care Center in Denver, Colorado. Clark was born November 28, 1951, the son of Albert and Hazel Dorsett Johnston. He grew up in Peabody, Kansas, where he graduated from Peabody High School in 1969. Clark studied Drafting at Northwest Kansas Technical College. Clark earned his Architectural License on April 6, 1990 and spent his entire career as an architect. He worked for Black and Veatch and other architectural companies but found the most professional success and personal satisfaction in launching and operating his own architectural firm. Many of the buildings he designed are standing in the Denver metropolitan area. He was preceded in death by his parents. He is survived by his wife, Susan Johnston, his children Kara (Mark) Harper, Keilly (Brandon) Lucas, Kale (Nicki) Johnston, Kolin (Ashley) Johnston, stepson, Christopher (Katie) Glynn, grandchildren, Acacia, Jordan and Kadence Harper, Jeppesen Lucas, Cameron Farneti, Derek Johnston, Tayvin Johnston, Cioara Glynn and Mila Khayet, his former wife, Nan Hemme, sister, Karen Johnston, niece, Amber (David) Clark and great-nephews, Sean and Austyn Clark. Clark had a passion for cars and motorcycles, restoring many old vehicles and British motorcycles, and even earning awards for his meticulous restorations. He was a perfectionist at the maintenance and care of his home, always attending to anything that needed repairs. After retirement, he found a new creative passion in making beautiful art out of discarded objects and reclaimed wood. He designed and created many crosses, wind spinners, mobiles, and sculptures. He often gave away these pieces to friends, family, and even strangers, taking great pleasure in creating them, but even more from giving them to grateful recipients. Clark's life was forever changed on April 30, 2020, when he sustained a traumatic brain injury due to a motorcycle accident. He continued to work tirelessly over the next 20 months at his rehabilitation. During this challenging time, he remained the most loving husband, father, and grandfather to his family for the rest of his life. Clark was a hard worker who demonstrated uncanny vision, unimaginable creativity, and rare artistic talent. He also had the most appealing, dry wit. He frequently whistled, laughed, and pondered and had a constant look of loving contentment fixed on his face when spending time with his family. The effects of his accident never took that away from him. The family wishes to thank all of the compassionate healthcare workers, physicians, therapists, and caregivers that helped make his recovery the best it could be following his accident. And many thanks for the prayers, gifts of food, and encouragement from family and friends during the past 20 months. In lieu of flowers, memorial contributions can be made to Friends of Staunton State Park Track Chair Program, Mark Madsen Accessibility Fund (Track Chair) - https://friendsofstaunton.networkforgood.com, or The Denver Hospice Care Center - https://thedenverhospice.org. We will celebrate Clark's life at a memorial service held on a soon-to-be-announced date.

Clark Johnston, 70, of Denver, passed away on Wednesday, December 22, 2021, at The Denver Hospice Care Center in Denver, Colorado. Clark was born November 28, 1951, the son of Albert and Hazel Dorsett Johnston. He grew up in Peabody, Kansas,... View Obituary & Service Information

The family of Clark Johnston created this Life Tributes page to make it easy to share your memories.

Clark Johnston, 70, of Denver, passed away on Wednesday, December...

Send flowers to the Johnston family.