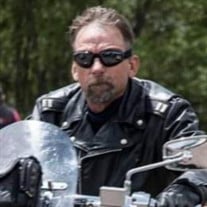 It is with deep sorrow that we announce the death of Caine J. Anderson May 22, 2022 at the age of 56. Caine was born February 28,1966 in Milwaukee, WI. In 1980 with his dad and step mom brothers and sisters he moved to Colorado. In 1987 he moved to Ordway, met his wife DeAnn (Foos) Anderson in1988 they married in 1989. Caine worked for AT&T across Colorado, Kansas and into Missouri, then began working with Reeves Brothers construction. He also worked with his father in law at F n S Service. Caine began his law enforcement/corrections career with the Crowley County Sheriffs Dept in 1990 until 1993. In 1993 he began woking at the Bent County Correctional facility. Caine promoted through the ranks to lieutenant until 1998 when Correctional Services Corporation a private prison opened up in September 1998 he began their as a Lieutenant. In 2000 Caine left the Crowley County Correctional Faciity and moved to Beaumont, Texas where he continued to work for Correctional Services Corporation after about a year he returned to Colorado and went back to work at Bent County Correctional Facility he then transferred to Crowley County Correctional Facility. In 2005 he left the correctional field to go help with hurricane Rita and Katrina rebuilding in the Texas area with good friend Mike Ham in the construction field. He returned to Colorado in 2006 where he began working construction for himself. Missing the Corrections field Caine returned to Crowley County Correctional Facility and was promoted through the ranks to Captain. In April 2014 Caine was diaganosed with Hodgkins Lymphoma cancer, he continued to work through his chemotherapy treatments and went into remission in November 2014. He continued to work at CCCF. In March of 2019 Caine was diagnosed again with Hodgkins Lymphoma cancer he underwent Bone Marrow Transplant in 2020. July of 2021 Caine and his family and doctors thought that a stem cell transplant would be good for him to make sure the cancer was gone so he could live a long life with his new granddaughter that was on the way. September 2021 Caine was released from the hospital but still had to stay close to the hospital. Caine finally got to meet his now 2 moth old granddaughter and he fell in love. October he was released to finally come home. Over the last few months his health declined he was admitted into the hosptial on Thursday May 19th 2022. On Sunday May 22nd Caine Anderson left to be with Ma and Dad. Through all of this Caine was about family, his beautiful granddaughter Kinsley that he lovingly only spent 7 month of his life with, his German Shepherd Dogs and his love of Demo Derby season. Caine leaves behind wife DeAnn (Foos) Anderson of 33 years, Sons Ross Alan Anderson, Christopher Lee (Lacy) Anderson granddaughter Kinsley Marie Anderson. Father and Mother in law Duane and Rosalie Foos, all of Ordway. Brother in law Alan (Ariel) Foos, of Rocky Ford. StepFather James Abuya of Milwaukee, Wisconsin. Brothers Ross Anderson of Pana, Illinois, Mike (Katie) Anderson of Green, Kansas, Sisters Stacey Brown of Mapleton,Oregon, Melissa Kuhlka of Milwaukee, Wisconsin. . Numerous nieces and nephews that he loved dearly. He was proceeded in death by his Father Dale L. Anderson, Step mother Susan L. Anderson, biological mother Carol (Wolski) Abuya, Nephew Kurtis Anderson. Services will be held at the River of life fellowship 411 E 9th street, Ordway, CO. at 11am on June 4th, 2022.

The family of Caine J Anderson created this Life Tributes page to make it easy to share your memories.

It is with deep sorrow that we announce the death of Caine J....

Send flowers to the Anderson family.