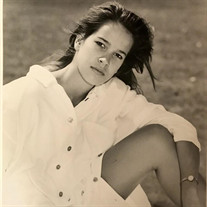 ALISON ELIZABETH O&#8217;KEEFE Alison Elizabeth O&#8217;Keefe was an extraordinarily uncommon woman. Though her deep- seeded sensitivity left her vulnerable to being hurt, she forgave straightforwardly, and was a fiercely loyal friend. Though... View Obituary & Service Information

The family of Alison Elizabeth O'Keefe created this Life Tributes page to make it easy to share your memories.

Send flowers to the O'Keefe family.